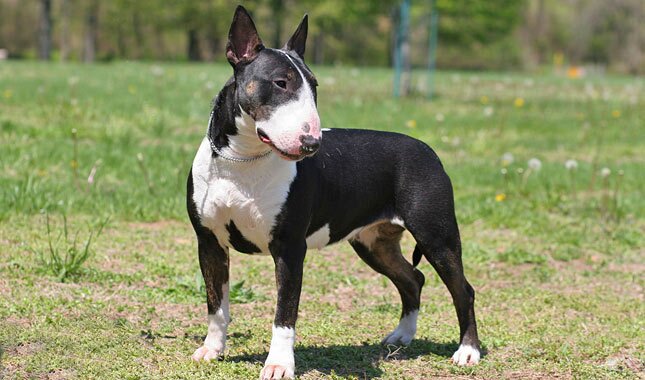 During the early 1800s dog fighters wanted to create a breed that retained the aggressiveness of the Bulldog with the speed and intelligence of the terrier breed. A crossing between Bulldogs and English terriers resulted in the creation of the Bull Terrier. Too bad for them that the dog did not perform as well as they wanted in the dog fighting world. The breed was left to their own devices and showed more promise as guard and watchdog since they were able to scare off intruders, but not to hurt or kill them. The breed got smaller (down to the mini size they are today) in an attempt to retain the watchdog qualities but be a size that trainers and handlers could manage.

Miniature Bull Terriers are small, sturdy dogs that most people agree are not the most attractive dog, but they are distinctive looking. They have oval, sloping muzzles and small eyes. The coat is short, sleek and close fitting. Grooming time is minimal. Brush occasionally and wipe down with a damp cloth to keep his coat looking sleek.

Personality-wise, Miniature Bull Terriers are a most determined dog. They are active and energetic and should exhibit a stable temperament. They can be amusing and entertaining — especially when they are receiving enough love and affection from their family. (Word of warning a neglected Miniature Bull Terrier can be very destructive dog!) While they are able to make family pets, Miniature Bull Terriers are best suited to an experienced dog owner as you need to be confident and assertive when training and reward positively. Early socialization is key with this breed as they were developed to be aggressive. The more they are exposed to as puppies, the more stability and even temperament you can bring out in them. They need plenty of exercise. They do great with other dogs but require much socialization to handle cats. Your children should be considerate and gentle with him. Most Miniature Bull Terriers are unaffected by strangers, save barking to announce their arrival.

If a Miniature Bull Terrier is not trained properly, he will pose a danger to you. The earlier you start his training and socialization, the easier and more success you will have. He will be more interested in playing since he has a very high level of exuberance, but be firm, patient, firm and kind and it will pay off. Though you will still have to pull most of your hair out. This is a very difficult dog to train. Try not to positively train with food rewards as this can exacerbate health problems. Praise, affection and other positive rewards are much better alternatives. Reserve food at the end of the session for exceptional progress. Most of your training will focus on socialization. Downplaying aggressiveness and protectiveness with other animals and people by constantly and slowly exposing him to new situations and strangers is the name of the game.

Siamese kittens are born white and their points appear within their first year. Unlike other pointed breeds, Siamese only come in four true points: seal, chocolate, lilac or blue.

A classic feline staple, more than any other breed, Siamese cats have been used to establish other breeds. Most notably, they’ve been used to establish the Balinese, Bengal, Birman, Burmese, Havana Brown, Himalayan, Colorpoint Shorthair, Oriental Shorthair, Snowshoe and Tokinese. The Siamese is possibly the most widely recognized pedigreed cat in the world.  (Who doesn’t know what a Siamese cat looks like?) Those gorgeous points, the loud voice and their lordly manner are beloved worldwide and by millions of “owners.”

Loyal, intelligent and personable, Siamese love to snuggle. They do adore spending time with similar looking felines, though they love all other cats. (Even dogs.) To a Siamese, everything is a toy, so expect him to get into EVERYTHING ALL THE TIME! Beware of what he learns between the lines — if something is done (or tolerated) two days in a row, it becomes a rule and, therefore an expectation. A Siamese is another cat that plays hard then sleeps hard. When they love you they want to be with you all the time. A closed door is not an impediment.

Siamese cats originated in Siam (what is now Thailand) as early as the 14th century. Westerners were first introduced to the breed in the 19th century. The first Siamese in the U.S. was given to President Rutherford B. Hayes in 1879. In Britain, they were introduced in 1884.

Siamese cats are moderately sized and females weigh between 6 to 12 pounds. Males are slighter larger.

Cosmo, a dachshund puppy, is introduced to water balloon play.

From the Funny Pets YouTube channel, here are some cats enjoying balloons.